The hometown of “Sanfrecce Hiroshima” is Hiroshima City, Hiroshima Prefecture. Sanfrecce is a name that was created by combining the Japanese word for three, “san,” with the Italian word “frecce” (arrow), meaning “three arrows.” This team name originates with the historical “three arrows” incident involving a feudal warlord closely connected to Hiroshima, Motonari Mori, and indicates the support obtained through the three unified strengths of Hiroshima citizens, local administration, and business. Also, it refers to the three factors at the core of team sports, “skills, tactics, and stamina” and the three principles that are necessary for each individual player, “spirit, technique, and physical condition.” Moreover, since the 2005 season, there has been a new design for the Sanfrecce Hiroshima club emblem, which represents the “Club Spirit” and “Club Goals” and is also “typically Hiroshima.”

The club mascots are Asiatic black bears, which live in the mountainous regions in Chugoku. “Sancce,” a mascot who is friendly towards the supporters, but strong against opponents, was named in a gesture of gratitude towards our supporters, with parts of his name taken from the English “thank you” and the Italian “grazie,” and also a shortened version of the team name Sanfrecce. In 2000, Sancce was joined by his girlfriend, who was named “Frecce” borrowing in part from the English “fresh,” expressing freshness, youthfulness, and purity. Our mascots also support Sanfrecce through their good teamwork. 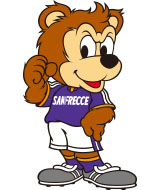 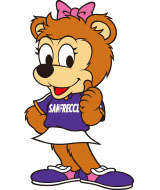 In October 1998, the largest football park in the Chugoku-Shikoku area was completed in Yoshida, Takata (now Akitakata) in Hiroshima Prefecture, the home of Motonari Mori, who is famous for “the lesson of the three arrows” that is the origin of the name of Sanfrecce Hiroshima.
This facility is a professional standard football park equipped with a natural grass football field and an administration building (clubhouse). Since the 1999 season, Sanfrecce Hiroshima have been conducting most of their training at Yoshida Soccer Park.

Via the Chugoku Expressway:
About 10 minutes from “Takata Interchange”

From Hiroshima Bus Center:
Take the Hiroden Bus (for Yoshida) -› about 80 minutes
-› get off at “Yoshida Eigyosho”
-› about 5 minutes by taxi
By train(JR)